Uvalde was the home of Vice President John Nance Gardner, and visitors can tour his home.

The town square, which Highway 83 passes through, features several antique malls and gift stores along with the Uvalde Grand Opera House, which still has perfromances.

Texas is famous for both its music and dance halls. One of the best examples can be found a few miles north of Uvalde. The Lone Star Saloon generally has country-western on Fridays and Tejano bands on Saturdays, Call (830) 591-9191 for a schedule.

In the age-old argument as to which state features the best barbecue, the Highway 83 Travel page is firmly on the side of Texas.

There are many great examples along 83 and one of the best is Lum's, just south of the Interstate 10 and Highway 83 intersection. 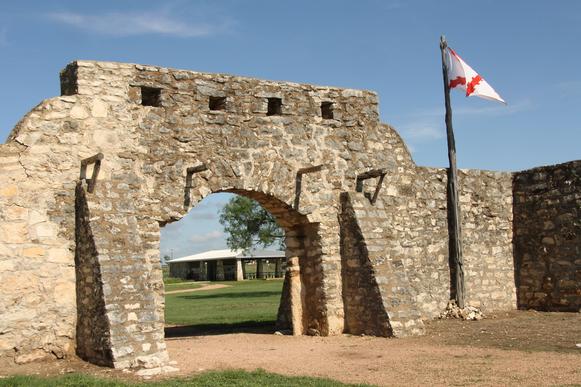 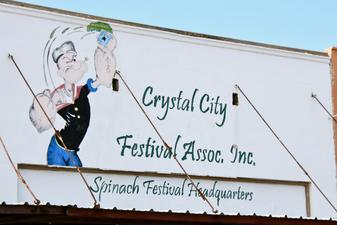 Highway 83 going south merges with Interstate 35. Travelers can find an auxillary county road on the west side, which will eventually end at a cluster of warehouses. To completely avoid the interstate, drivers will have to go right before the last warehouse, and take a series of streets before making it back to Business 83 in Laredo. It is recommended that a GPS or smartphione map be used to attempt this. 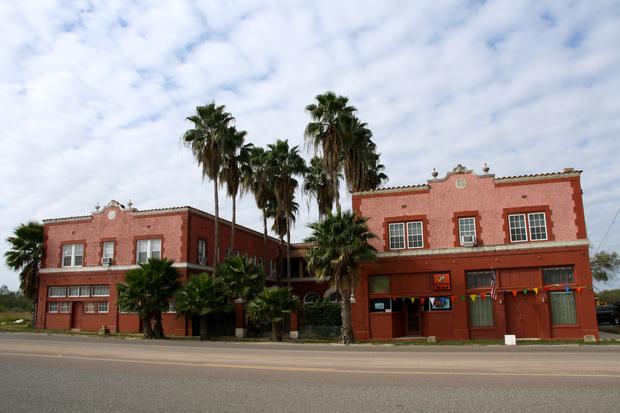 Highway 83 south of Abilene passes through ranch country and eventually climbs into the scenic Hill Country near Junction. From there, it's a 100-mile long speed bump until the land flattens out again at Uvalde. Crystal City is the birthplace of the Texas Vietnam Veterans Memorial Highway. To find out how a Crystal City veteran fought to get the designation, read The Last American Highway in Texas.

From Junction to Uvalde is the state’s famous Hill Country. Nature enthusiasts flock to the town of Leakey (pronounced LAY-key) and its environs to hunt, fish, camp and get away from it all. The town only has about 400 permanent residents, but its population soars on weekends.

Garner State Park nine miles south of Leakey and 31 miles north of Uvalde is a popular spot for accessing the Rio Frio River. The water is normally languid and shallow here and popular for tubing.  There is a fee to enter the park. 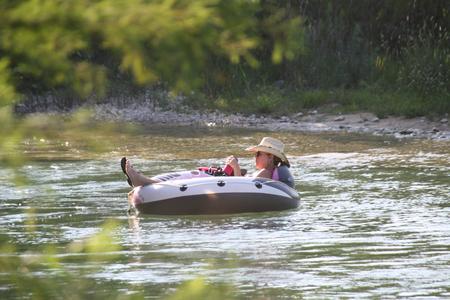 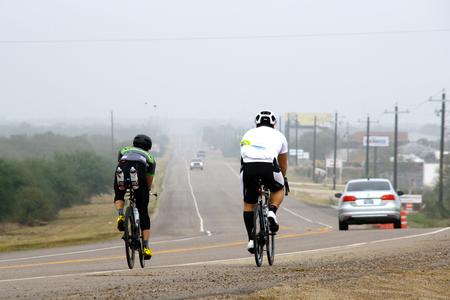 Take a musical trip down Highway 83 in Texas. Click on video

Head to the eastern edge of town to the high school. In back of the sports complex is the site of a World War II internment camp that housed Japanese, German and Italian families. There are four historical markers there, which give a brief history of the camp. The foundation for the bathhouse is still visible.

Along with what would one day be called The Great Plains Highway, and later, Highway 83, the Old Spanish Trail passed through Junction. The auto trail was eventually supplanted by Texas' longest east-to-west road, Interstate 10. Travelers who want to avoid the interstate can skip a lot of it by heading down Main Street, passing under this beautiful old bridge, then taking a left up the hill until they reach I-10. It's only a couple miles to the Highway 83 turnoff that takes drivers into the heart of Hill Country. 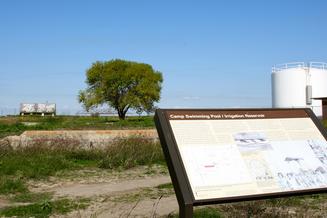 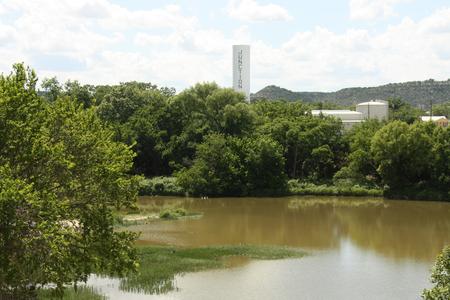 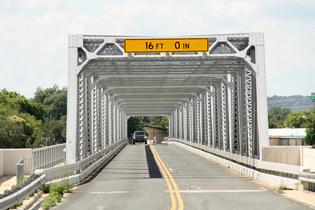 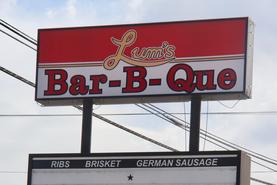 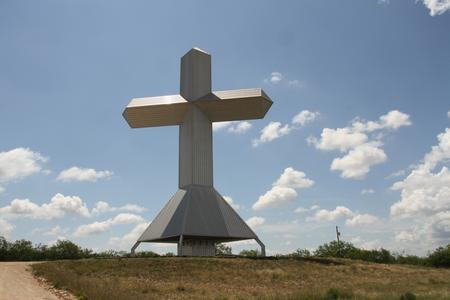 The once abandoned Catarina Hotel has now reopened as the Palm Suite & Inn. It has about 24 rooms, a lounge and restaurant featuring Chinese and American food.Like the Sutton House in McCook, Nebraska, the Bel-Asher House (left) is influenced by the Prairie School of architecture. The sandstone structure was built by rancher and railroad owner Asher Richardson. The house is hard to miss as it sits just off Route 83 in Asherton, Texas. The town of Catarina established by Asher Richardson as a railroad depot, once had some 2,000 residents in the 1920s.

Travelers on this stretch of Highway 83 may notice quite a few new motels in the area, the result of a recent oil and gas boom in the area. The once abandoned Catarina Hotel re-opened during the boom, but has reportedly closed again.

The region remains a hotspot for deer hunters and many cattle ranches have been converted  to private grounds where well-heeled hunters coming from all over to bag a prized rack.

Crystal City is famous for growing spinach as well as this Popeye statue, which has been on the town’s main street since the 1930s. The town holds a Spinach Festival annually around the second week of November. 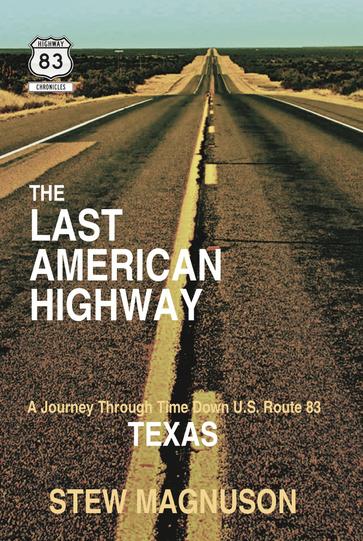 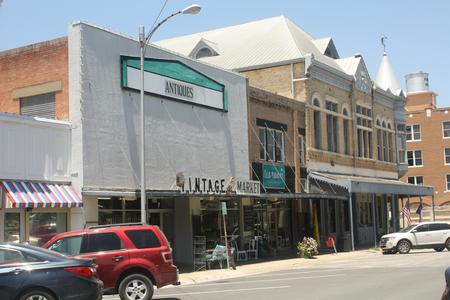 The town at the "junction" of the North and South Llanos Rivers has a lot to offer. Campers can find campgrounds along both rivers.

In 1954, legendary football coach Paul “Bear” Bryant took over as head football coach at Texas A&M. He found the players he inherited lacking, and took them to this remote satellite campus near Junction. During brutal heat, he relentlessly drilled his players with letting them drink water. The camp was immortalized in a book and ESPN film, The Junction Boys. The campus is now part of the Texas Tech University system, and can be found along Highway 337 south of town. Look for the signs to the campus. The screened cabins where the players presumably spent some sticky, uncomfortable nights are still standing.

In March 1758, an alliance of Comanche, Wichita and Caddo Native Americans attacked and sacked a Spanish mission a few miles east of present-day Menard, Texas. The mission, and the fort a few miles upstream of the San Saba River, were there to convert the Apache and protect them from their long-time enemies, the Comanches. That didn’t sit well with the Comanches, who were then the most powerful nation on the southern Plains. The force laid siege to the fort, but never overtook it. The friars inside the mission didn’t fare so well.
A 1930s Work Progress Administration project rebuilt a reproduction of the fort. That too eventually fell into ruin, but the site was restored once again and updated with informative historical markers. Follow the signs from Highway 83.

The mission is east of the town, a couple miles downriver on Farm Market Road 2092. A historical marker is all there is to see there.

Stop in Menard's beautiful park along the San Saba River  and among the pecan trees to stretch your legs.

Ballinger, Texas, is renown for its many antique stores, its beautiful Carnegie Library, one of the few donated by the steel magnant to small towns that is still in use, and the 100-foot tall crucifix south of town overlooking the Colorado River Valley. The Cross was a gift to the people of Ballinger from the family who owns the MIracle-Gro plant food company.