To get a feeling for what it was like to travel Highway 83 back when it was known as The Great Plains Highway, go south of I-80 a few miles and go east on East State Farm Road for a mile or two until you see the turn south for Old Highway 83. The gravel road winds back and forth and goes up and down as the old highways did before they were straightened out and paved.

Stop by Grain Bin Antique Town, a group of re-purposed wooden grain bins stuffed with bric-a-brac from a bygone era.

The road eventually leads to the town of Maywood, where drivers can pick up modern-day Highway 83 again. 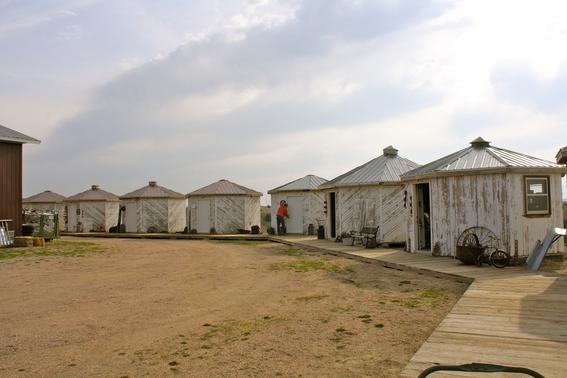 An access road on the west side of the Niobrara valley along 83 will take motorists and bikers to a campground as well as a legacy bridge that spans the river. This was the original path of the highway before the new bridge was built.

The arched cantilever truss Bryan Bridge, which spans the river, was named the “Most Beautiful Steel Bridge of 1932 (Class C)” by the Institute of Steel Construction, for compatibility with its environment. A State Historical marker gives more details. This is also a great spot to take pictures of the river since it is much closer to the water than the new bridge. 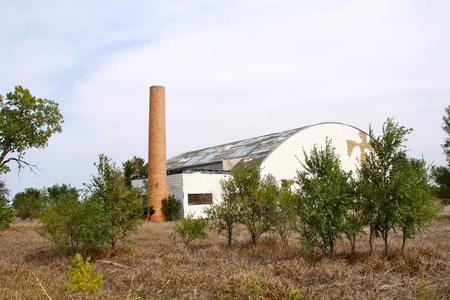 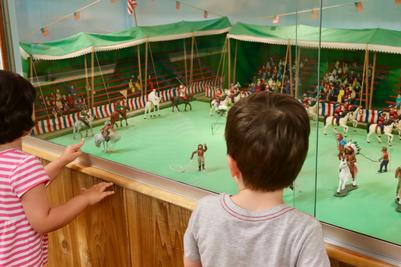 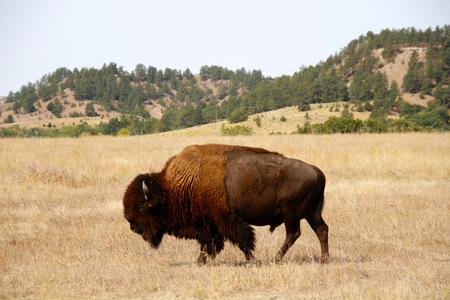 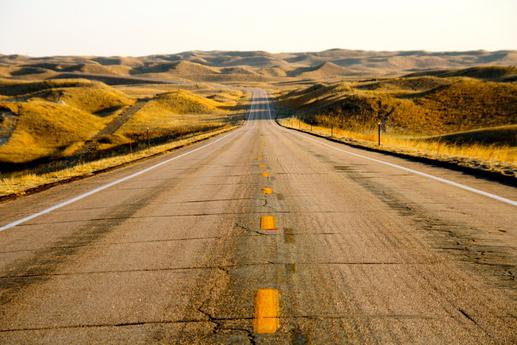 Runza. It's a meal in a bunza! The Czech people's contribution to American fastfood can be found in Nebraska at its Runza Huts. This unique local chain offers what some call a "cabbage burger." Inside the baked bread is a blend of ground beef, cabbage and spices. You can get it traditional style or with cheese.

Travelers on Route 83 can find four Runza Huts, two in North Platte. One is near Interstate 80 as Highway 83 goes north, and another in town as it goes south. So you can't miss it. Valentine and McCook also have Runza Huts. The chain is renown for its burgers as well. 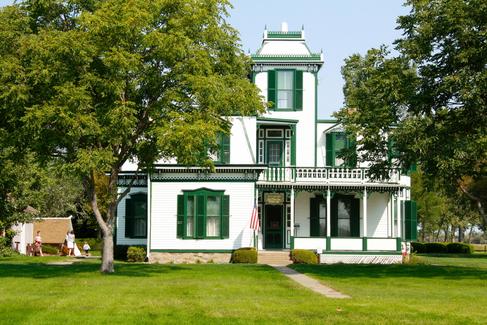 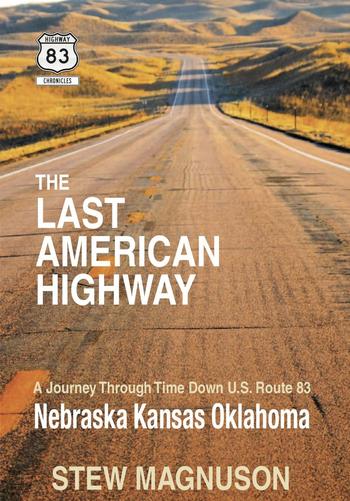 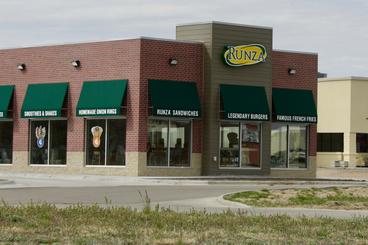 If Interstate 80 is the nation’s main east-to-west freeway, and Route 83 is the longest and most central north-to-south highway, then it can be argued that North Platte is the “Crossroads of America.”
The Oregon and Mormon Trail passed by here as it hugged the south side of the Platte River, and later the Union Pacific Railroad and the Lincoln Highway, the first coast-to-coast railroad and highway.

At the Golden Spike Tower west of town, observers can peer down on the world’s largest train yard. It handles some 10,000 rail cars per day.
Summer hours are 10 a.m. to 7 p.m., and 1 to 7 p.m. Sundays. Winter hours are 10 a.m. to 5 p.m., and 1 p.m. to 5 p.m. Sundays.
North Platte was the home of Buffalo Bill Cody (top left), and visitors can drive west for a few miles on Highway 30, formerly the Lincoln Highway, and visit the Scout’s Rest Ranch, which was built in 1886 when the showman was world renowned for his Wild West Show. It is now a Nebraska State Park, and has numerous mementos from his heyday.
Open 9 to 5 in the summer and 10 to 4 in the offseason.

Just north of I-80 on Highway 83 is the Fort Cody Trading Post, a must-stop for those seeking unique souvenirs of the West. It also features an amazing moving diorama. Buffalo Bill's Wild West in Miniature took 12 years to make and has 20,000 pieces hand-carved by Ernie and Virginia Palmquist. The show starts every half hour and is free.

A few miles north of McCook and about three miles to the west of Highway 83 are the last remaining Word War II hangars standing in Nebraska. Towns all over the West and up and down Route 83 hosted training bases for B-17, B-24 and B-29 pilots and crews.

Look for signs on the west side of the highway for the turnoff. 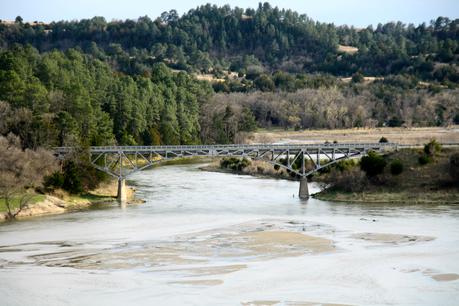 McCook is another railroad town, and the Amtrak line still passes by here. Route 83 intersects with Highways 34 and 6, which was once a main federal east-to-west highway.

Fans of architect Frank Lloyd Wright will want to take a turn north up George Norris Ave. to the corner of F Street , where the Sutton House sits (left). This prairie–style home was built early in Wright’s career before he became a household name. It is one of the few homes he designed west of the Mississippi that is still standing. It is a private residence, though, and not open to the public.
George Norris Street is named after the Nebraska Senator, one of the most powerful lawmakers of his day. His home is one block north of the Sutton House.
Open Tuesday through Saturday, 1 to 4:30 p.m. Call ahead to confirm opening times. 308-345-8484

The Sand Hills of Nebraska encompasses 19,300 square miles of stabilized dunes and is one of the most scenic areas along Highway 83. While it has been recognized by such organizations as the Nature Conservatory and the World Wildlife Fund for its ecological importance, very little of it has been developed for tourism. There are only two towns in the 130-mile stretch between Valentine and North Platte (Thedford and Stapleton). However, the Valentine National Wildlife Refuge, 20 miles south of Valentine offers travelers a closer look at the intricate mixture of wetlands and grasslands. There is an overlook on the east side of the road with some information about the Sand Hills environment. A spur on the opposite side of the road will lead visitors into the heart of the refuge. This is prime ranchland and there truly are more cows than people. A lot more cows!
Another beautiful scenic overview is at the Dismal River, just south of Thedford. The spring-fed river cuts through high bluffs dotted with pine trees. The “dismal” moniker has nothing to so with its appearance. It was treacherous to cross in the days before the bridge, hence its name. 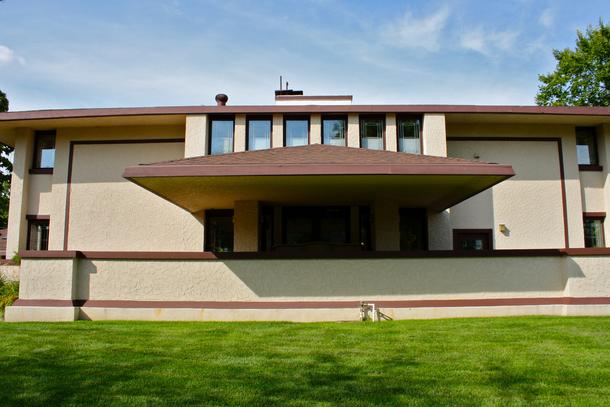 
Or find in it bookstores and museum gift shops along the road:
Plains Trading Co., Valentine
Kimber's Convenience Store, Stapleton
A to Z Books, North Platte

The 222 miles of U.S. Route 83 in Nebraska offers travelers some spectacular river valleys the beautiful and unique Sand Hills, North Platte, Nebraska, which this website declares the “Crossroads of America,” and one of the few homes built by architect Frank Lloyd Wright west of the Mississippi. Route 83 is named the Veterans of Foreign Wars Memorial Highway in Nebraska.

The Niobrara River just south of Valentine has been declared a National Scenic River, and it’s not hard to see why. Canoers, tubers and kayakers love the shallow, meandering path of this spring-fed river that cuts through the Sand Hills. Several outfitters in Valentine can rent or arrange trips. Valentine has a variety of hotels and campsites to accommodate those who want to explore this beautiful river valley.

Be sure to stop by Plains Trading Co. bookstore on Valentine's Main Street for an excellent selection of Western fiction, nonfiction and unique Nebraska gifts.

The Fort Niobrara National Wildlife Refuge to the east of town features bison, elk and many other prairie critters.