A short drive over the Missouri River is Fort Pierre, which has a lot to offer history buffs.
The Verendrye Museum is named after the two sons of French-Canadian explorer, Pierre Gaultier de Varennes de La Vérendrye, who led the first European expedition into present day North Dakota. Later, two of his sons Louis and Chevalier, returned to search for the elusive Western Sea. Their whereabouts on their journey was a matter of conjecture until 1913 when some local kids unearthed a lead plaque on a hill overlooking the town. The plaque had the names of the expedition members etched into it, and signified that they had claimed the land in the name of the King of France. Take the road up Verendrye Drive and climb the hill to the spot where the tablet was discovered. This overlook has wonderful views of the river and the two towns.The museum is open in the summer hours from 9 to 5. Or call 605-223-7761 for an off-season appointment.

World Famous Pioneer Auto Show
This collection of more than 275 antique vehicles is a roadside attraction worth checking out. The Geisler family has been collecting classic cars, tractors, motorcycles and memorabilia from the early days of the automobile age since the 1950s. It started at a gas station as a few old cars designed to attract travelers heading west on Highway 16 to the Black Hills.
Within a few years, the collection had grown big enough to store in a building. It is now spread out in 30 buildings.
There is a gift shop, a reproduction of a prairie town and an old fashioned diner.
The gas station, originally a Phillips 66, is stills standing at the corner of Hwy 83.
Summer hours are 8 a.m to 9 p.m. It closes at 6 p.m. during the winter months.

Surrounding the four-lane highway south of Fort Pierre, is the Fort Pierre National Grasslands. If there weren’t signs, drivers would never know it. There is no interpretive center, or even a scenic overlook.

The prairie has always gotten the short shrift when it comes to preserving and appreciation of our natural heritage. Scenes from the Academy Award winning movie Dances With Wolves was filmed at a nearby ranch.

Pull over wherever possible to take some pictures of this short-grass prairie. 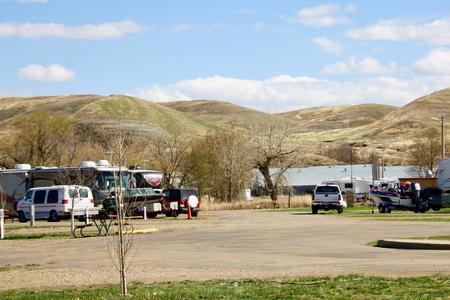 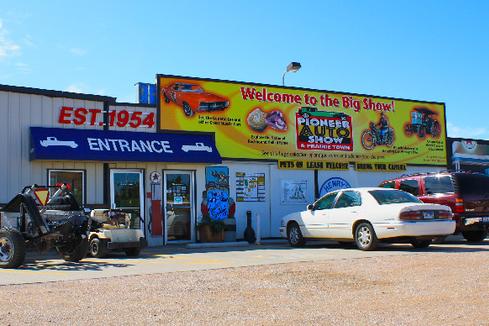 Legendary Rodeo Cowboy Casey Tibbs (1929-1990) grew up on a homestead some 50 miles northwest of here, but he always considered Fort Pierre his home. Tibbs was called the “Babe Ruth of rodeo” for helping to popularize the sport. After years of work, the Casey Tibbs South Dakota Rodeo Center opened its doors in 2009. It has memorabilia from Tibbs’ career as well as displays on the history of rodeo. Along the west side of the highway is a statue of Tibbs riding a bronc. Look up and the center is on the hill to the west.

Highway 83 cuts through the middle of the land of the Sicangu (The Lakota Brule, or Burnt Thigh people). Legend has it that this band of the Lakota nation fell victim to a prairie fire and its members had to run into a pond to escape its flames. The resulting scars gave the people their name.
The Sicangu's most famous leader was the legendary Spotted Tail, or Sinte Gleska.To visit the chief's grave site, travelers will have to turn west for a couple miles on Hwy 18, then head south on a county road to the town of Rosebud.
The largest town the highway passes through is Mission.

Look for a bas-relief tribute to Spotted Tail on the south side of the road as it passes through town.
The Sicangu Heritage Center, operated by the local tribal college, has a wonderful collection of Lakota art.

It is open year round except for major holidays, Monday through Friday, 9 to 5. Other times, by appointment only. (605) 856-8211.Follow the signs to the Sinte Gleska College's Lakefront Campus, which is a few miles east of the U.S. Route 18 and 83 intersection, to visit the center. 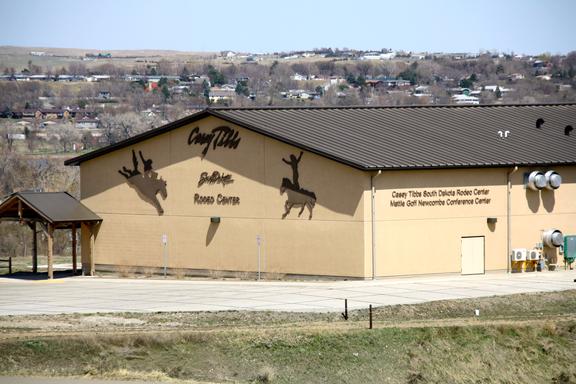 Travelers on the 242 miles of U.S. Route 83 in South Dakota with find the charming and historic cities of Pierre and Fort Pierre, vast grasslands and drive through the heart of Lakota Country at the Rosebud Reservation. Highway 83 is dedicated as the Vietnam Veterans Memorial Highway in South Dakota.

White River Country, South of I-90 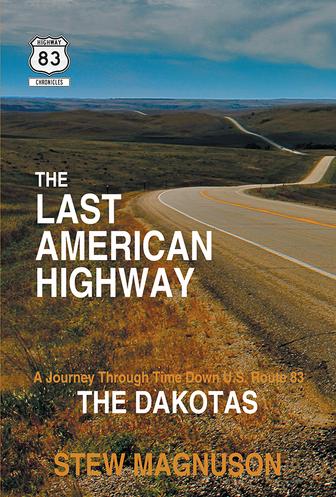 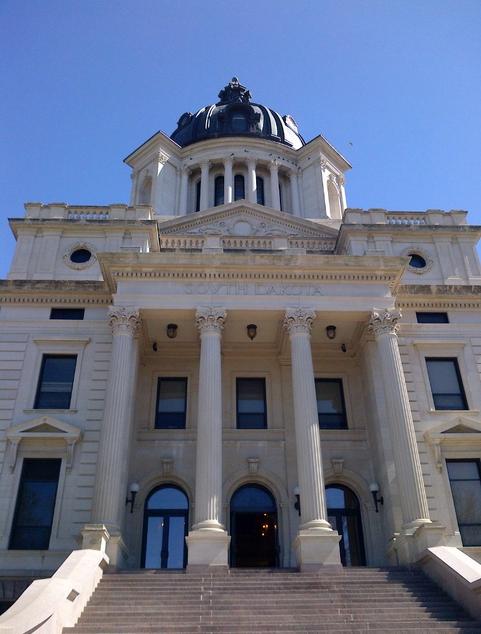 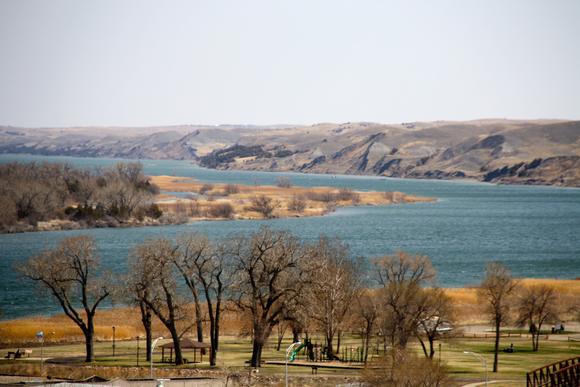 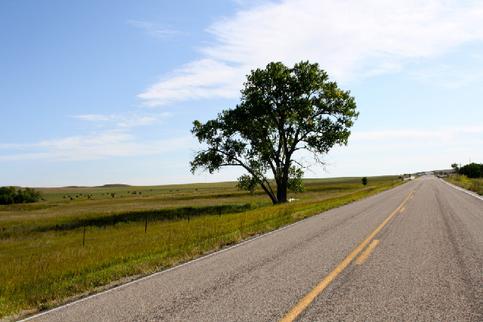 Learn more about the history found along Highway 83 in North Dakota in the book, The Last American Highway: A Journey Through Time Down U.S. Route 83: The Dakotas.
CLICK HERE TO ORDER

Like the road east of Bismarck, Highway 83 briefly merges with an Interstate south of Pierre. But also like the North Dakota, drivers can take the legacy road, which can be found just to the north of the Coffee Cup Fuel Stop.
Take this road west and avoid the interstate. This 20-mile stretch was once co-signed with U.S. Route 16, which was replaced by Interstate 90.
There are some beautiful little train trestles here, as well as the small town of Draper, South Dakota.
The road will join 83 again at Murdo, S.D.

A few blocks to the east off the highway is Lily Park. Along with having nice picnic grounds and a view of where the Bad River meets the Missouri, those following the Lewis and Clark trail will want to stop here and see where the expedition first encountered the Lakota people, better known as the Sioux.

The Corps of Discovery had a tense standoff with a band of Sincacu (Burnt Thigh) band here. As the historian Stephen Ambrose speculated in his book, Undaunted Courage, a skirmish between the two parties would have been a disaster for the United States, and the legendary trip may have turned out differently. Fortunately, cooler heads on both sides prevailed.

Next to the park is a campground. (right) 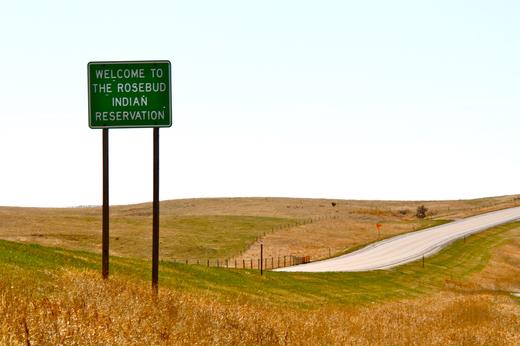 Pierre/State Capitol
As the state capital, Pierre offers visitors a chance to visit its state history museum, library and capitol building. The South Dakota Cultural Heritage Center, which includes the state archives as well as a museum, has several ongoing exhibitions celebrating the heritage of the state’s settlers and Native American tribes, and follows their stories into the 21st Century. The unique building is built into the side of a hill. Follow the signs north of the capitol building.