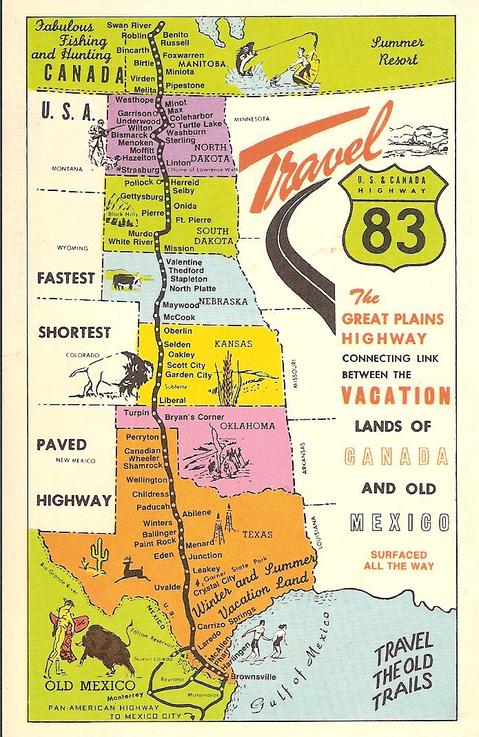 Prior to 1926, the United States was crisscrossed by hundreds of “trails” or highways that were mostly unpaved, dirt roads maintained by counties and states. Boosters who were part of the “Good Roads” movement gave these trails names, and tried to promote them to the growing numbers of motorists as nice routes to travel. The Lincoln Highway, for example, was the first of the coast-to-coast highways. The Lee Highway ran from Washington, D.C., to San Diego. The Great Plains Highway, running north to south roughly where Highway 83 is today, was one of these informal roads.
The Federal Highway Commission in 1924 was tasked with establishing a federal highway system that would end these ad hoc roads and names. While some of the boosters complained that changing the names to numbers would be cold and colorless, the commission decided the most logical way to name the roads would be with easy to remember digits — even numbered roads going east to west and odd, north to south, with the coast-to-coast roads ending with “0.”
When the list of roads was first floated, North Dakota representatives complained that the state had only two roads, one in the east and one in the west, but nothing down the middle. The commissioners added Route 83, which initially ran from Sterling, North Dakota to the South Dakota border.
It next expanded down to Pierre, South Dakota, and over the decades, the highway grew. It was mostly gravel at first, and little of it was paved outside of the towns.
Until the late 1930s, Highway 83 south of Pierre had a different route. Highway 83 ran east of there, and traveled south through Nebraska and Kansas where Highway 183 is today. As the vision of Highway 83 as a border-to-border highway grew, it was changed to the western route it runs today and the two highway numbers switched.
Because of the Great Depression, and World War II, progress on completing the road was slow. But throughout the 1950s, more and more of it became paved.

Meanwhile, the road extended into Canada as Manitoba 83.
Finally, more than three decades after it was established, Route 83 was paved from border to border. The last stretch was sealed near Thedford, Nebraska, in Sept. 1959. Thousands of people attended The Highway 83 celebration held in the Sand Hills town.Highway boosterism returned and the U.S. & Canada Highway 83 Association began promoting the road as a great place to travel. It printed up several versions of the postcard seen to the right.

The Great Plains Highway and U.S. Route 83: A History