One of the most well preserved and oldest towns on Highway 83, Roma’s historic district is a must-see for travelers. This was the terminal point when steamboats once plied the Rio Grande, and most of the merchant shops and buildings are still standing.

An observation spot a block north of the down gives tourists the best opportunity to see the river itself and to gaze into Cuidad Miguel Aleman in Mexico.

The downtown served as the backdrop for Viva Zapata, a 1952 film staring Marlon Brando. Read more about some of the movies filmed along Highway 83 HERE. 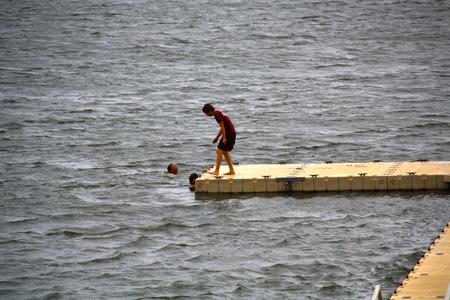 Take a musical trip down U.S. 83 in Texas. Click video below 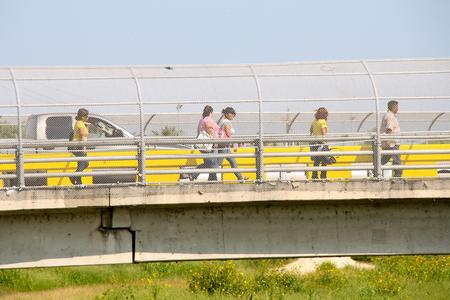 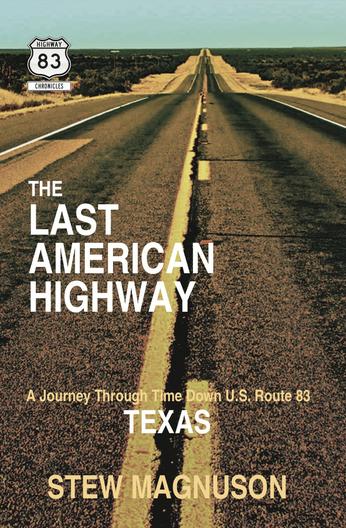 Fort Ringgold in Rio Grande City was a military base that was a part of about every major border conflict that took place along the valley in the 19th century. Today, it belongs to the local school district. But visitors can drive inside and see the old barracks along with the Robert E Lee House (right), which has a small museum.

Lee briefly stayed here prior to the Civil War and joining the Confederacy.

The University of Texas-Rio Grande Valley administers the Rio Grande Valley Trail and markers can be found along 83. While far from the main action, the valley was strategically important as the South smuggle cotton over the border to help pay for the war effort. The Union for a time had control over the region, but couldn't hold on to it.

Palmito Ranch, the last battle of the Civil War, took place east of Brownsville on Texas Route 4. The site is not developed for tourism, but there are historical markers. Read more about the battle and the valley's tumultuous history in The Last American Highway in Texas. 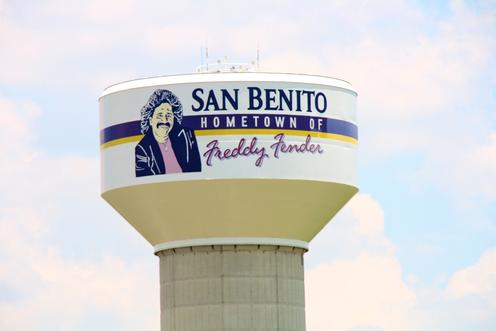 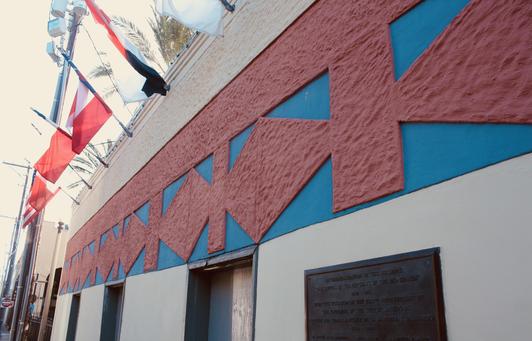 Birding in the Rio Grande Valley

Plenty of history awaits those who want to explore this unique border town. Seven flags have flown over the region, including that of the Republic of the Rio Grande, a short-lived government that had aspirations to rule over Northern Mexico and Southern Texas. It lasted 283 days. Today, Laredo is known as the "City of Saints and Generals" because every other street is named after a religious or military leader.
Take a stroll through St. Augustine Plaza, the heart of downtown Laredo. Across the street is St. Augustine Cathedral, which was established in 1778.
Also on the plaza is the Republic of Rio Grande Museum (pictured left) on 1005 Zaragoza Street tells the history of the movement. It is open 9 a.m. to 4 p.m. Tuesday through Sundays.
Taking up the southern side of the plaza is the splendid La Posada Hotel, which not only has luxurious but reasonably priced rooms, it is the best bet for dining either at the casual La Zaragoza Grill next to the lobby, or the slightly more upscale Tack Room steakhouse.


Once, almost medium to large-sized town on the Highway 83 had a drive-in movie theater. Today, there are only two.

Between the towns of Weslaco and Mercedes on Business 83 is the last operating drive-in movie theater on the 1,885 miles of the highway.

Abilene, Texas, has the twin-screen Town & Country Drive-in a few miles away from the highway.

The end of the road (or the beginning depending which direction travelers are taking) is Brownsville. The downtown is devoted to the cross border trade and those wishing to cross into Matamoros, Mexico to shop can walk across the bridge.

The Brownsville Historical Association located at 1325 E. Washington St has an excellent exhibit of local history and is open Tuesday through Saturday 10 a.m to 4 p.m. Not to be missed is the Brownsville Museum of Fine Art at 660 E. Ringgold St. 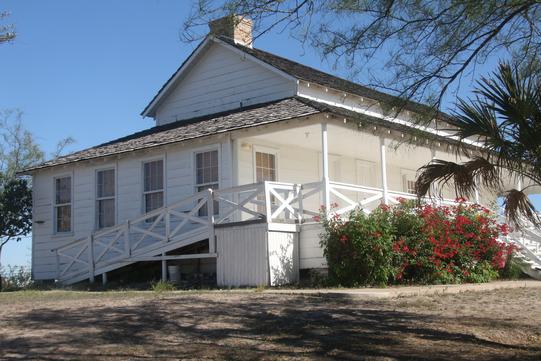 The original town of Zapata, and several other villages, are now at the bottom of Falcon Lake. The new town is a fishing Mecca and there are numerous boat landings where anglers or water sports enthusiasts can access the lake. Those who want to do so are advised to stay within the U.S. territorial limits as bandits and smugglers have been seen on the waters. When the water levels are low, an old bridge that used to be part of Highway 83 emerges at a point off the shore. The old pilings make for great bass fishing. 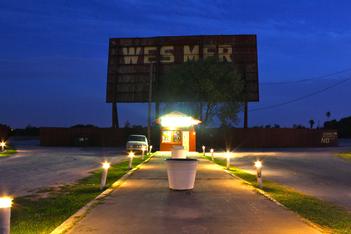 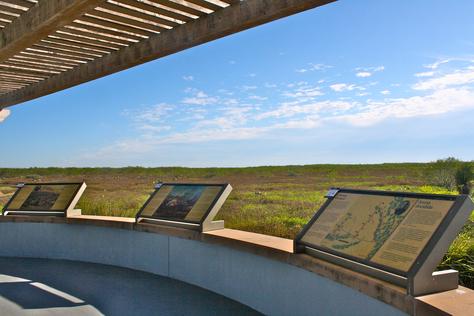 At McAllen, the highway turns into an expressway for some 50 miles from here to Brownsville. However, Business 83 is still open from McAllen to Harlingen. The road was once promoted in the 1930s as America’s Longest Main Street, and it still retains that feel. All the big box shops, chain motels and the all too familiar restaurants are out on the expressway.

South of Harlingen, those wanting to avoid the Interstate can stick to the access road and follow the old co-signed Highways 83 and 77 down Central Boulevard and W. Jefferson Street to the end of the road at Brownsville.

Business 83 as it goes through Mission, Texas, splits into two one-way streets. Going north, the street is Tom Landry Boulevard, named after its most famous son, the Dallas Cowboy's Head Coach. You will have to go north on Business 83 to see this impressive block-long mural commemorating Landry's career. 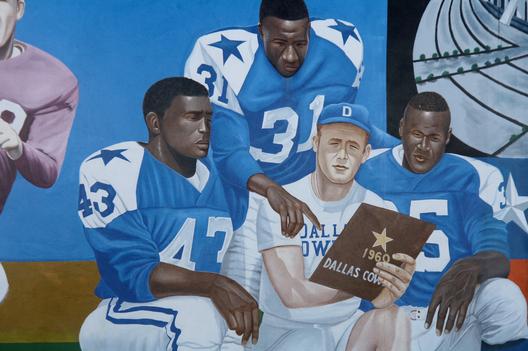 While other towns such as San Antonio might make a claim to being the birthplace of Conjunto music, San Benito was at the very least a hotbed for this regional style that combined polka instruments with traditional Mexican music to create this uniquely American music.

Narcisso Martinez, the Hurricane of the Valley, was one of the music's pioneers and called San Benito home, along with one of its most important labels, the Rio Grande Recording Co.

One of the most famous Mexican-American songwriters, who topped both the pop and country-western charts, Freddy Fender, is the town’s favorite son and has an exhibit of his life.

Fender's final resting place can be found at the new San Benito Memorial Park Cemetery. Take Highway 345 northeast of town, and the marker is on the right. 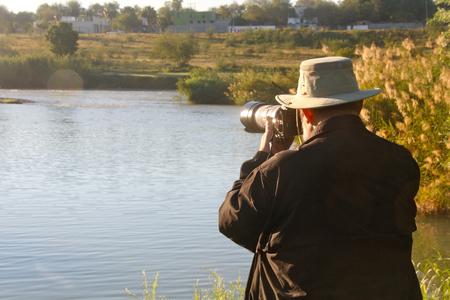 With hundreds of species seen nowhere else in North America, the Rio Grande Valley is a Mecca for birders. The City of Laredo alone has nine areas for spotting birds in the city limits and hosts a festival every February as the migrating birds make their way north.

The first battle of the Mexican-American War was fought about three miles east of present-day Highway 83 and five miles north of Brownsville on May 8, 1846.
The Palo Alto Battlefield National Historical Park has an excellent interpretive center and well-maintained and marked trails that allow you to walk where the soldiers squared off. The two-year war would forever change the map of America.
The park and center is open from 8 a.m. to 5 p.m., seven days per week except Thanksgiving, Christmas and Jan. 1. Admission is free. From Old Highway 77-83 or the expressway, take State Highway 550 east and follow the signs.

The Lower Rio Grande Valley section of U.S. Route 83 stretches from Laredo to Brownsville, and around Roma is where the highway signs begin to read “East” and “West” instead of “North” and “South.” From Mission to Harlingen, this area was once promoted as the “Longest Main Street in America.” 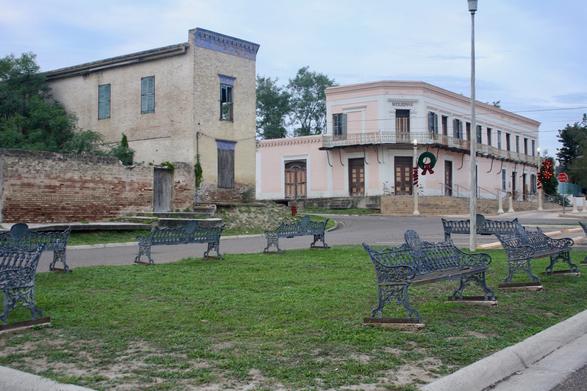